Hot water, lights, refrigerators, computers and cell phones are just a few examples of everyday necessities that are reliant on some sort of power source, and it’s often difficult not to take these things for granted. A look through the pages of historic newspapers reminds us that while basic forms of power and energy have been utilized by humans for hundreds of years, perspectives on old ideas are continually refreshed over time.

The question is, will any invention ever be “perfect,” or will there always be room for improvement? It has taken several centuries and the hard work and dedication of countless individuals and groups to fine-tune the forms of power that we use today. The development and use of electricity is a perfect example, as one of the most commonly promoted power sources in early 20th century newspaper articles and advertisements.

In about 600 B.C., Greek philosopher Thales of Miletus observed that by creating friction with a piece of amber, it could attract lightweight objects, like feathers, with what we know today to be static electricity (1). About 1000 years later, English scientist William Gilbert coined the term “electricity” from the Greek word for amber, ηλεκτρον, or elektron (2). Over the next several centuries, numerous experiments were conducted to find out more about the properties of electricity, one of the most famous being Benjamin Franklin’s kite and key lightning rod test in 1752 (3). The 19th century brought the invention and development of the electric battery (4), the electric motor (5), and industrial use of electricity. In the late 1800s, electric light bulbs were introduced, and electric companies and power stations began to operate in the United States, although only half of homes in the U.S. had electric power by 1925 (6).

In the early 1900s, electricity was portrayed as an optimal commodity, with an emphasis on the benefits of electric lighting as comparable to the luxuries of “sewers,” “cement walks,” and “filtered water,” as seen in this ad to attract residents to the city of Gold Hill, Oregon:

Electric lights were encouraged to increase profits for businesses:

As well as to ensure home security: 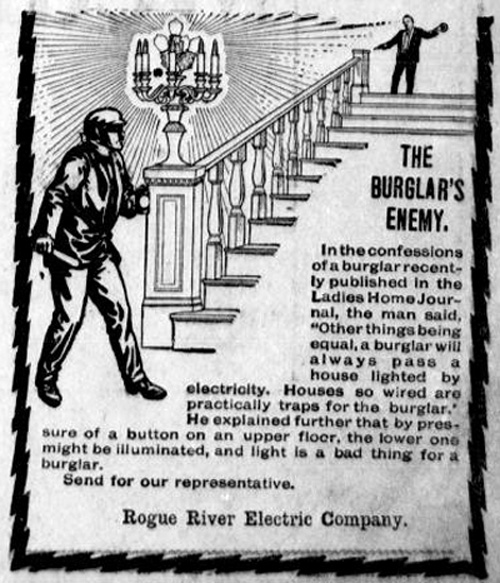 A century later, advertisements like these are seldom seen. In the United States at least, electric lights are prevalent and expected in all places, indoors and out. However, use of electricity still comes at a price. While lightning and static are forms of electricity that can be found in nature, it is difficult to harness these energies, and electricity itself is not readily available for use; it must be generated from natural resources with the help of human intervention. We have become so accustomed to flicking light switches and plugging in appliances that we often don’t think twice about the true sources of our electrical power.

In short, electricity is created when electrons are manipulated to flow along a circuit path, which typically involves the use of pressurized steam to turn turbines that then rotate a coiled wire surrounded by a giant magnet, which converts mechanical energy into electrical energy through electromagnetic induction (7). The burning of fossil fuels, such as natural gas, coal, and oil, is often the method by which water is heated to create the necessary steam. However, we now know that harvesting these resources can be dangerous, and combustion of these materials produces pollutants that are harmful to humans and the environment. Plus, fossil fuels are available only in limited supplies, so if we continue to use them, we will eventually run out. With the current controversies surrounding oil drilling and fracking for natural gas, it is questionable as to whether some of today’s fuel suppliers are more interested in providing sustainable power sources for society, or if they simply just want to make a quick profit. This clip from 1902 reveals that production and marketing concerns were just as prevalent back then as they are today:

Aside from fossil fuels, electricity can be derived from nuclear fission, water, wind and solar energy.  Nuclear power was unheard of in the early 1900s; nuclear reactors, fueled by uranium, are a more modern source of electricity. However, uranium is extremely radioactive, making it dangerous to mine and use, and nuclear power plant disasters have littered the late 20th and early 21st centuries.

Rushing water is capable of turning turbines without causing pollution, but massive amounts of water must be available, typically provided by the construction of dams. Hydroelectric power has prevailed in the Pacific Northwest, thanks to the abundance of rivers that flow through the region. In fact, in 1889, the Willamette Falls power station in Oregon City became the first AC (alternating current) hydroelectric generator and the first plant to transmit electricity over long distances in the United States (10).

While hydroelectric power was seen as a great idea at the time and a way to decrease the use of exhaustible fossil fuels throughout the 20th century, the dams that are required to sustain power generation have proven to be harmful to salmon and other fish populations, as well as natural river ecosystems as a whole, and dams have been known to fail and break over time, causing destruction to surrounding areas. By the end of the 20th century, the Pacific Northwest hosted at least 58 hydroelectric dams that provided 63% of the region’s electricity (8, 9). The U.S. government has already begun to remove dams that have been identified as particularly threatening (11).

Wind is another energy source that has been around for a long time; as early as 5000 B.C., wind was utilized to move boats up and down the Nile River (12). Windmills also have a long history, taking many shapes over the centuries, and this clip from 1920 illustrates innovations on the ancient concept: 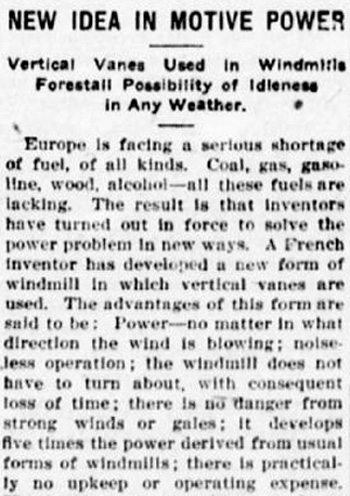 Wind turbines were used to generate electricity in Denmark as early as 1890, but it wasn’t until 1980 that the first official wind farm opened in the U.S. Like all forms of energy, there are positive and negative aspects of utilizing the power of the wind, but today’s futuristic-looking windmills seem to be working rather well to generate electricity in windy places (12). 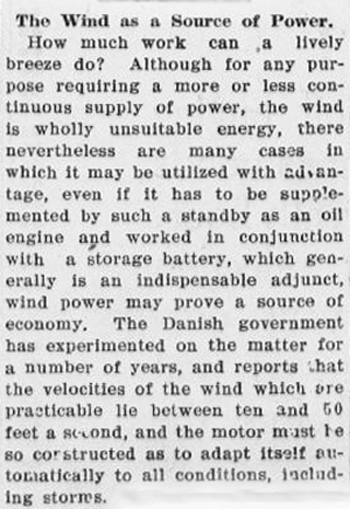 Solar power, seemingly a recent concept, is actually another idea that has been toyed with for centuries (13). In the late 1800s and early 1900s, in sunny places like California, Arizona and Hawaii, water pipes were sometimes installed on the rooftops of houses, allowing the sun to heat household water: 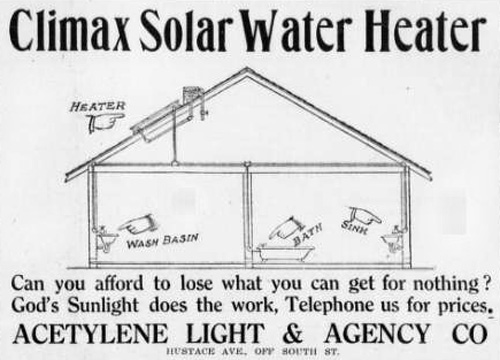 The only drawback to this apparatus was that water stored in tanks would cool down overnight, so hot water was not always readily available. Today, special mirrors are used to focus heat from the sun to boil water for the steam needed to generate electricity, and photovoltaic cells made of silicon are capable of conducting electricity that can be stored in batteries.

Developments in solar power have historically taken a back seat to the cheaper and more readily available fossil fuels, but as we move forward in time, new developments will become old news, and perhaps some day every house and building will have solar panels or electricity-generating windmills that will be a regular part of daily life. Just as we find it hard to imagine using candles, kerosine lamps and iceboxes today, future generations might eventually be baffled at the idea of burning fossil fuels to generate electricity. In 100 years it is likely that people will have made innovations in power sources that we haven’t even imagined yet; only time will tell. Until then, let us use our energy wisely and appreciate the true sources of our electricity.

One response to “Sustainable Energy”